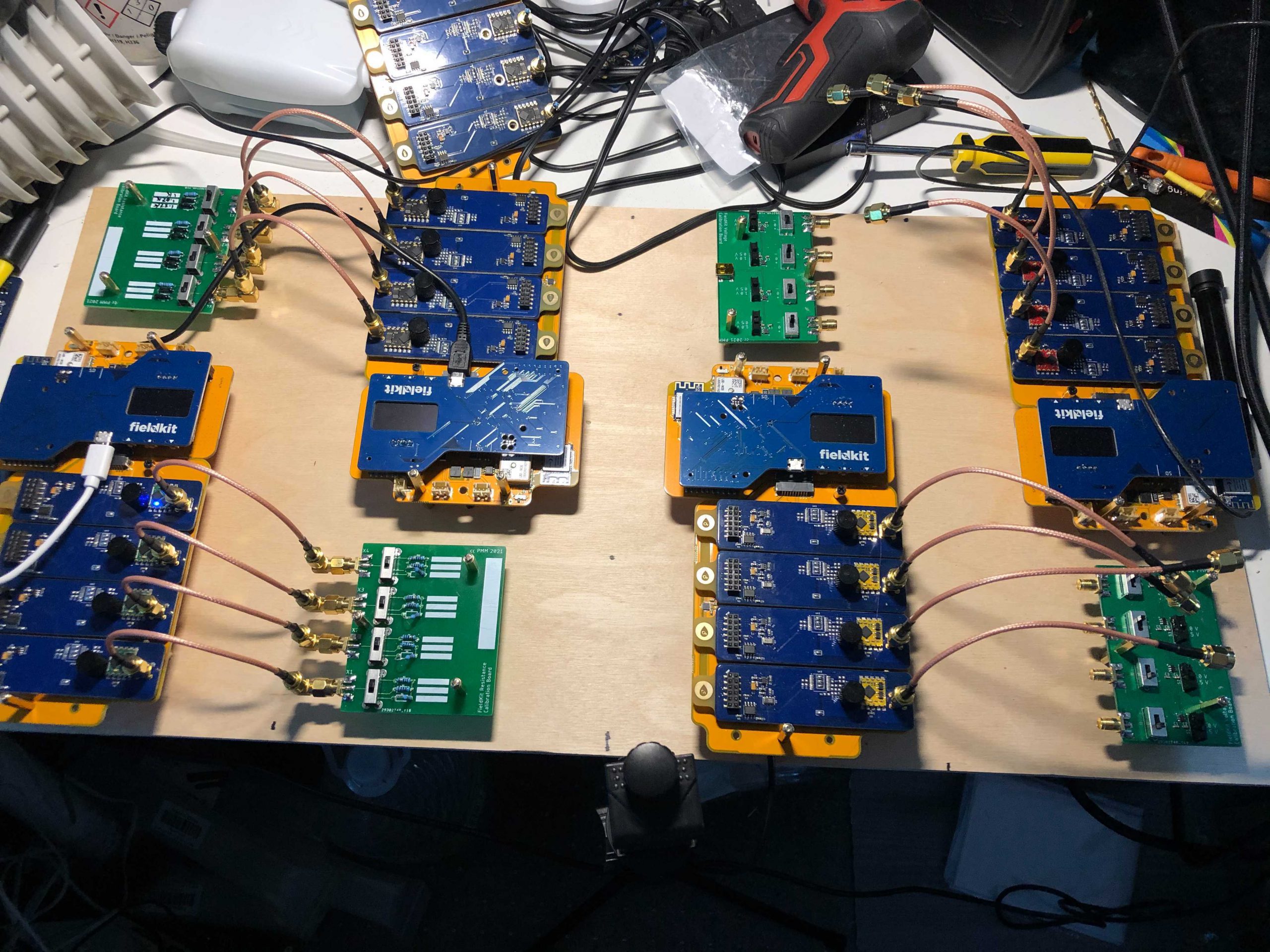 Since the beginning, FieldKit’s commitment to being open source has been at the very heart of what we do. We see the move from proprietary to open source as a radical and necessary change in how conservation is done, reducing reliance on expensive tools, increasing accessibility to technology, and ultimately leveling the playing field around who is able to do science. When the information gathered using the tools of conservation technology morphs from something only seen by a privileged few into a public good accessible to all, then the entire landscape of conservation is transformed.

But first, to achieve our mission to make research grade sensing more accessible, we had to design the hardware that makes up a FieldKit station. All design is a process of balancing competing priorities and making trade-offs, such as weighing the time, risk, cost, and difficulty of designing and proving out a new circuit to do a specialized job versus the temptation to use a circuit which has already been developed and packaged for integration. Where good circuits had been open sourced, we integrated them without hesitation—that’s the whole idea!—but when those circuits were proprietary, and especially when they involved proprietary firmware, things got more complex. In the cases of wifi radios and GPS receivers, you barely have a choice, but sometimes the decision is a closer call.

In order to focus our efforts to meet our ambitious goals, we made the decision to use another company’s OEM circuit, packaged as a castellated module, as part of our water sensors. It nagged at us to use a proprietary module for a job we could ultimately design our own circuit to accomplish, but the OEM product was already being widely adopted by others and initial tests with it looked promising. Thus, we set about building a version of the FieldKit hardware, a “version A,” that could be put out in the wild as soon as possible and put through its paces by experts and the community.

Making research grade sensing more accessible means reliable, accurate data at a fraction of the cost. Thus, as we moved deeper into product development, we were excited to bring on an Instrumentation Specialist, Pete Marchetto, to help us audit our hardware and perform rigorous testing to determine the accuracy of the data coming from FieldKit. With his help, we have discovered that the version A boards we were using would experience intermittent issues that result in them returning unreliable data. Additionally, the calibration methods recommended by the supplier were found to be insufficient for the entire range of the sensor. Increasingly, we found ourselves asking questions of the OEM producer which they couldn’t answer, and the proprietary nature of that hardware component meant that our prospects for independently deciphering the issues were by no means certain. Such is the struggle with incorporating proprietary “black box” hardware into a larger open-source project.

Obviously, this was disappointing. And we kicked ourselves for not just trying to design and test our own water chemistry circuits from the start. We had made a decision at the time based on the information available to us and with what seemed likely to become an industry standard, and it didn’t pay off. With this news, we decided to take a two-pronged approach. We would try to remedy the issues in-house and by working with the manufacturer where possible, while simultaneously accelerating the development of our own “version B” module boards. At least that way, we could mitigate risk and ultimately end up contributing the solution back to the open-source community. 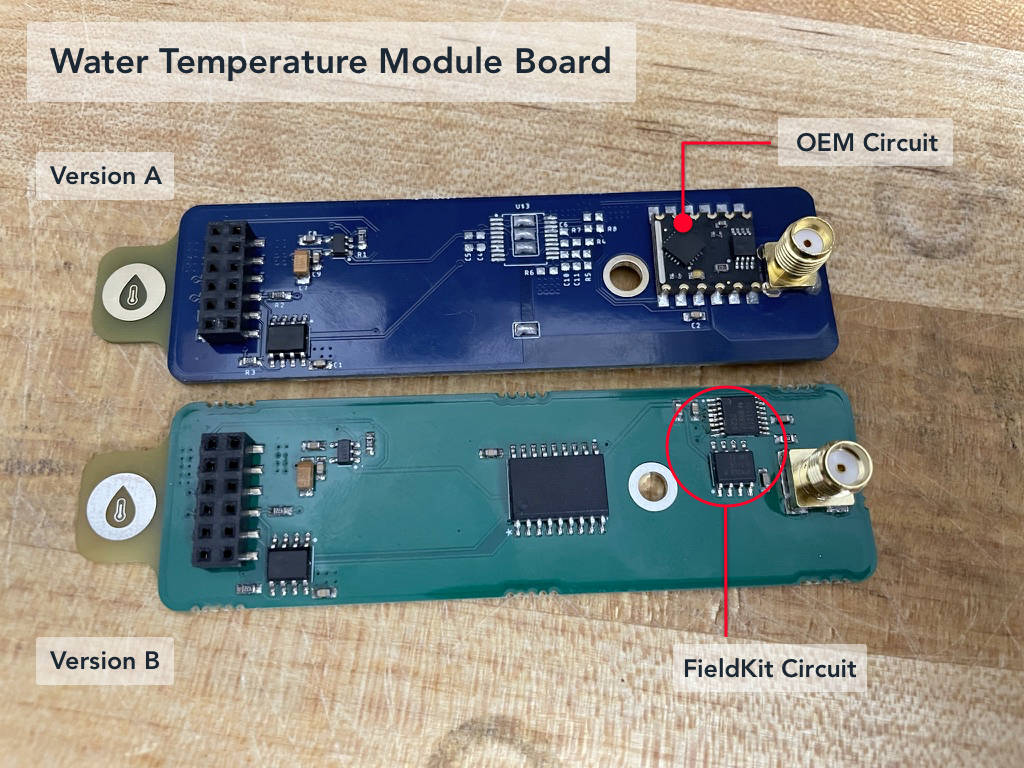 Unfortunately, after significant effort we have not been able to satisfactorily solve the problems with the OEM circuit in-house or by reaching out to the manufacturer. As it stands right now, we have built quite a few water module boards using this third-party hardware that we cannot responsibly say will provide scientifically-accurate data.

As a result, all development efforts were moved to producing and testing new, completely open-source water module boards in-house.

As we make this transition, we have also taken all FieldKit water modules out of stock and are no longer selling these as part of our first presale. I want to take this opportunity to apologize to the few early FieldKit community members who have received one of these boards. It is of utmost importance to us at FieldKit that you get accurate data. Therefore, we plan to replace all of the version A hardware in the field with our new module boards at no charge to the individuals and organizations using them. Until then, we will provide the best support we possibly can to anyone currently using the potentially uncertain hardware.

To demonstrate what we have seen over the course of the testing process, here are graphs comparing the data gathered by version A and version B of each water module while they were in a controlled test setup. Version B is our new and improved design. 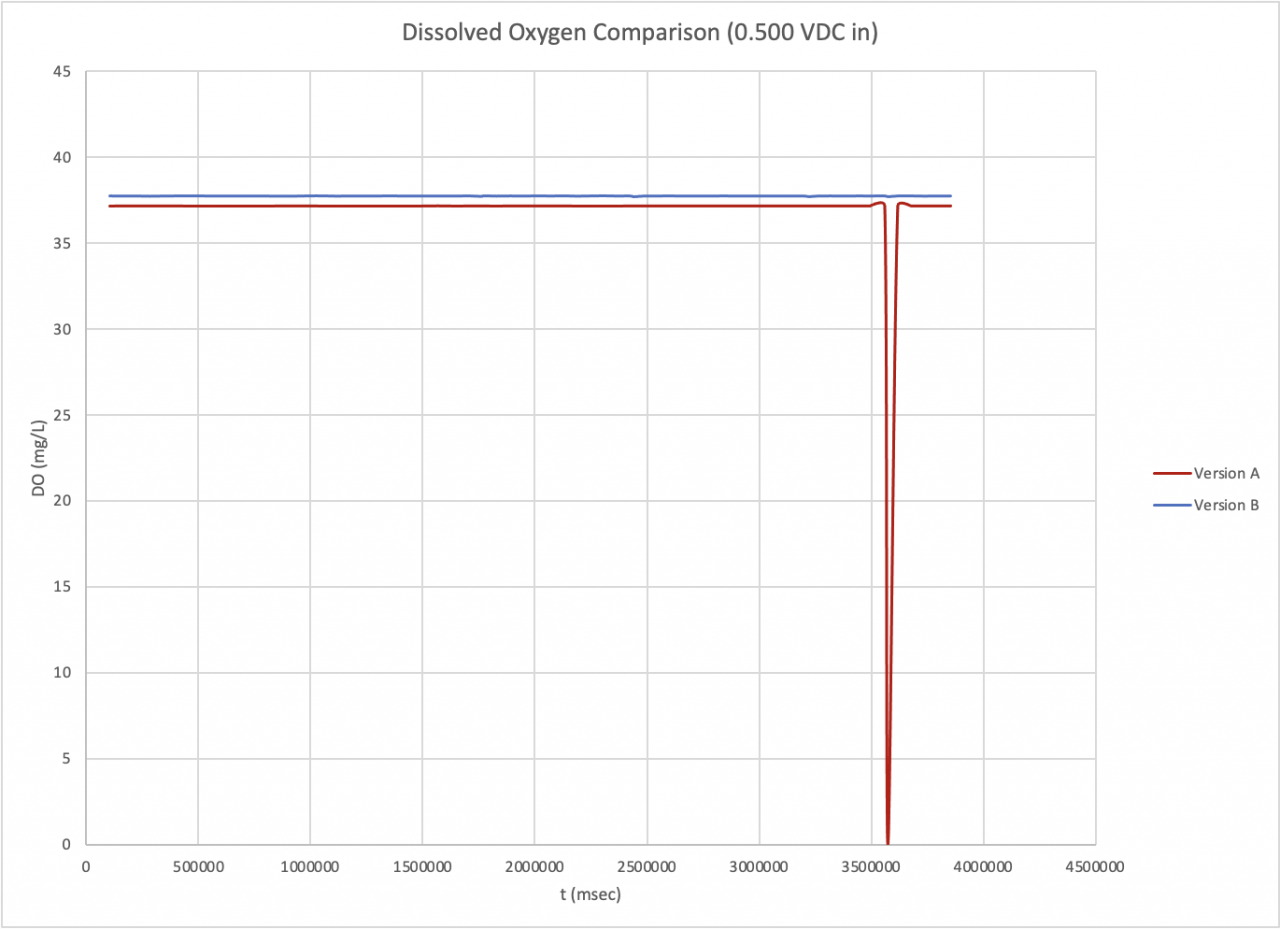 Dissolved oxygen comparison graph. Note how the Version A board goes up, drops suddenly to zero, then goes back up to the higher value, then settles back down. This also makes for some large questions as to the reliability of the Version A module in this case. 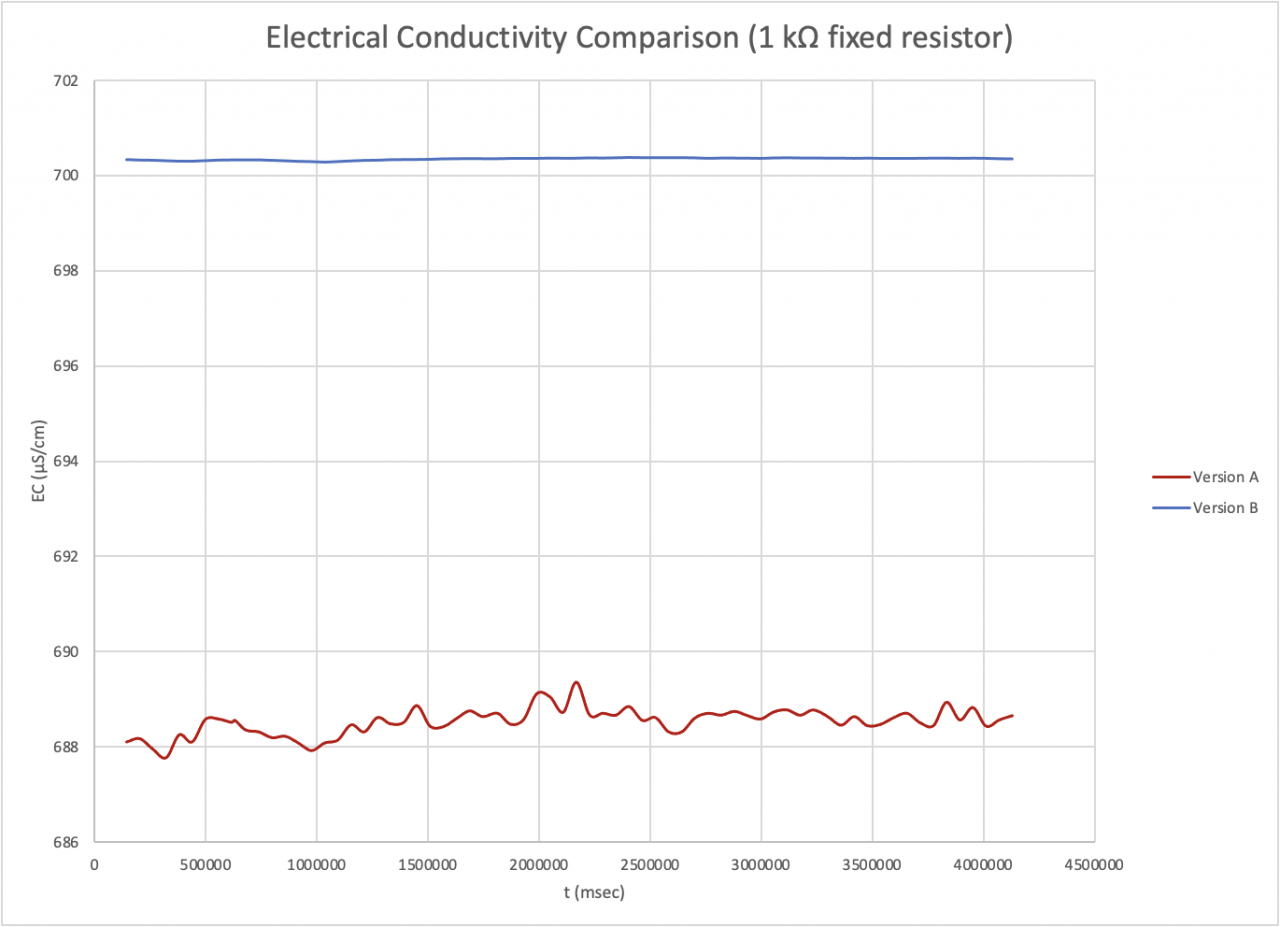 Electrical conductivity comparison graph. Note how the Version A module not only has a noisier signal, but also has an average offset of about 22 µS/cm from the true value, while the Version B module is both less noisy and only has an offset of <0.5 µS/cm. 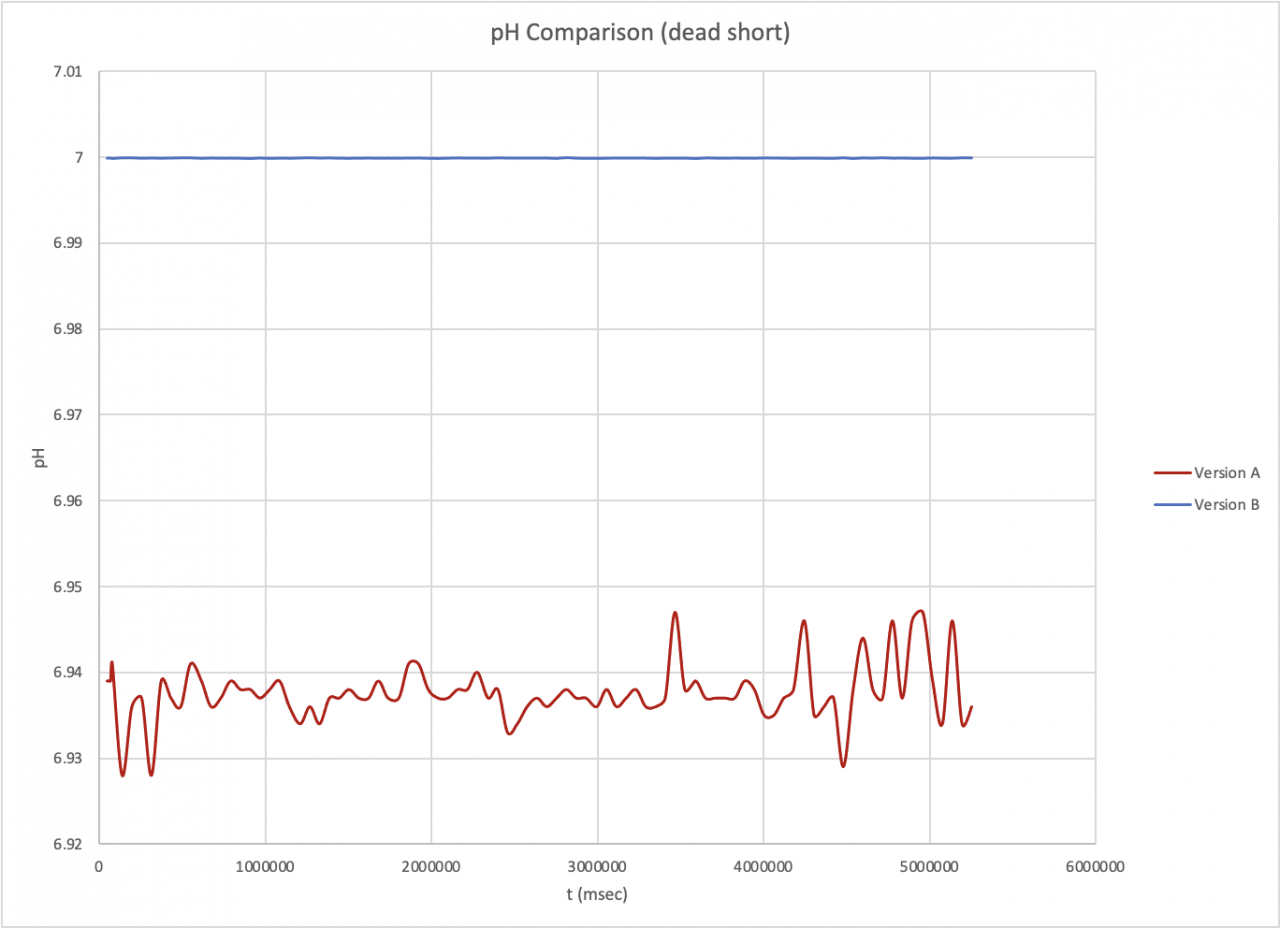 pH comparison graph. Note how the Version A module is not only noisier, but also has an inherent offset of (on average) about 0.06 units. 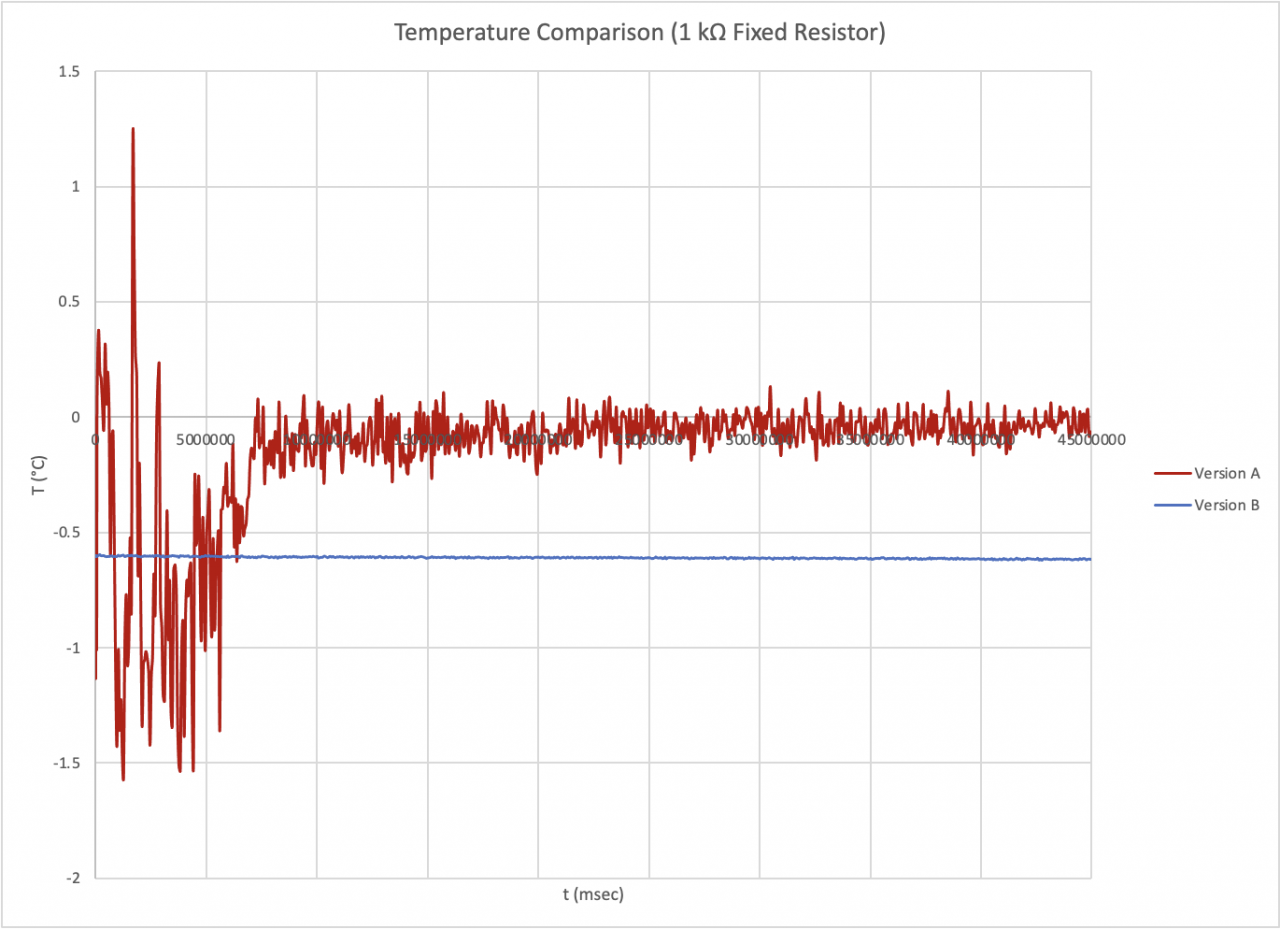 Temperature comparison graph. Note how the Version A module is not only noisier than the Version B, but also takes a good while longer to settle into a single measurement, which itself is significantly offset from that of Version B. 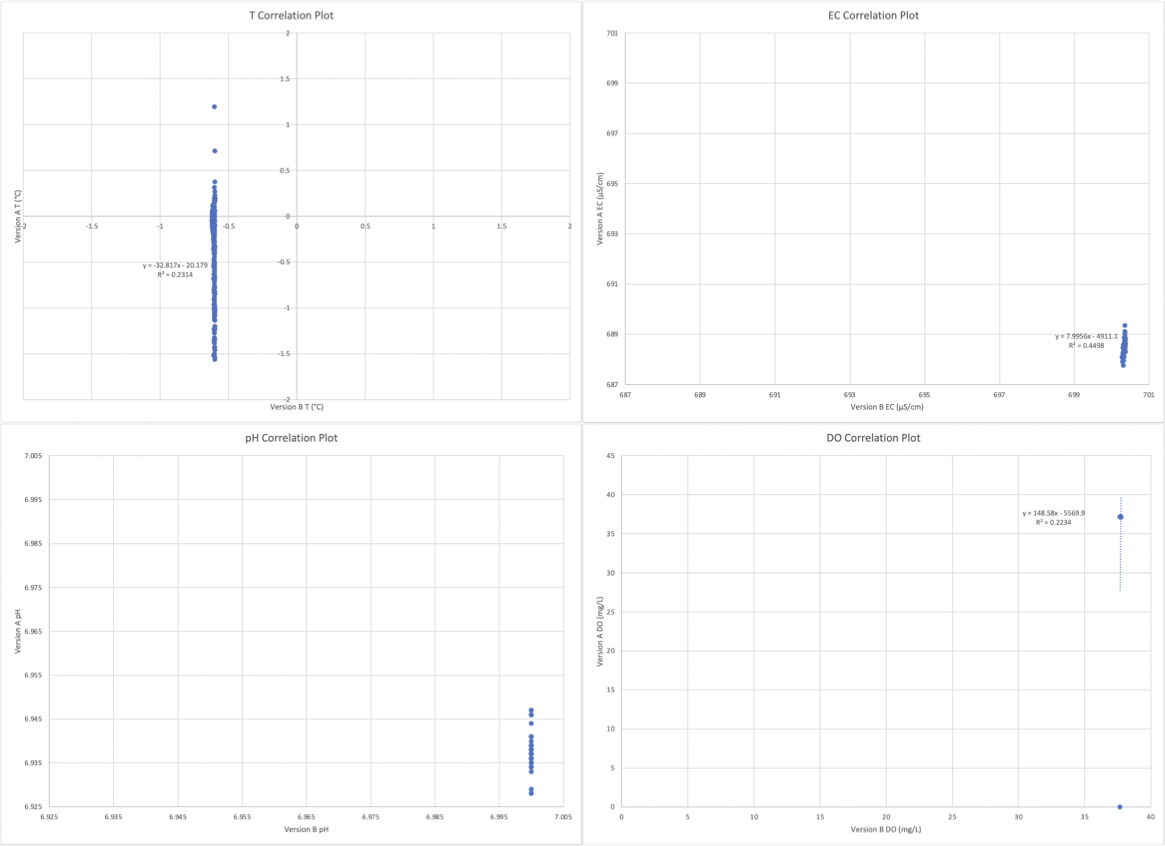 Correlation plots of all four modalities. The Version A values are on the y axis (vertical), while the Version B values are on the x axis (horizontal). Whichever axis has the larger range of values is noisier, and therefore has the larger uncertainty. Since all of these are graphed on equal scales for both axes, it’s easy to see that the Version B of each modality’s module is significantly lower noise, and therefore lower uncertainty.

Although this is an additional complication added to a rollout process that has already been complicated and delayed by the pandemic and the subsequent ongoing supply chain disruptions, we are excited about what this means for FieldKit. Designing these modules in-house sooner than we had planned will give us more control over development and has already presented more opportunities for optimization. These module boards are an improvement to the existing FieldKit Water in every way possible: more accurate data, better and more efficient power consumption, higher resolution, more reliable operation, increased flexibility in calibration, and without proprietary code.

Though this setback has been disappointing, it is also an opportunity for us to reaffirm what FieldKit is ultimately about: lowering the costs and barriers to entry currently associated with conservation through the use of open source technology. With full visibility into the entirety of the hardware, we will be able to provide better support and improve our product faster than we would with the version A technology. These new water module boards will also provide better guide posts for open source developers looking to build on the FieldKit platform, a crucial part of our long term mission. We are hoping to have our new module boards available as soon as possible before this fall, and we will keep you updated on the development process.

Coming soon: a follow-up post from our Instrumentation Specialist going over the why and how of developing our own hardware in detail.