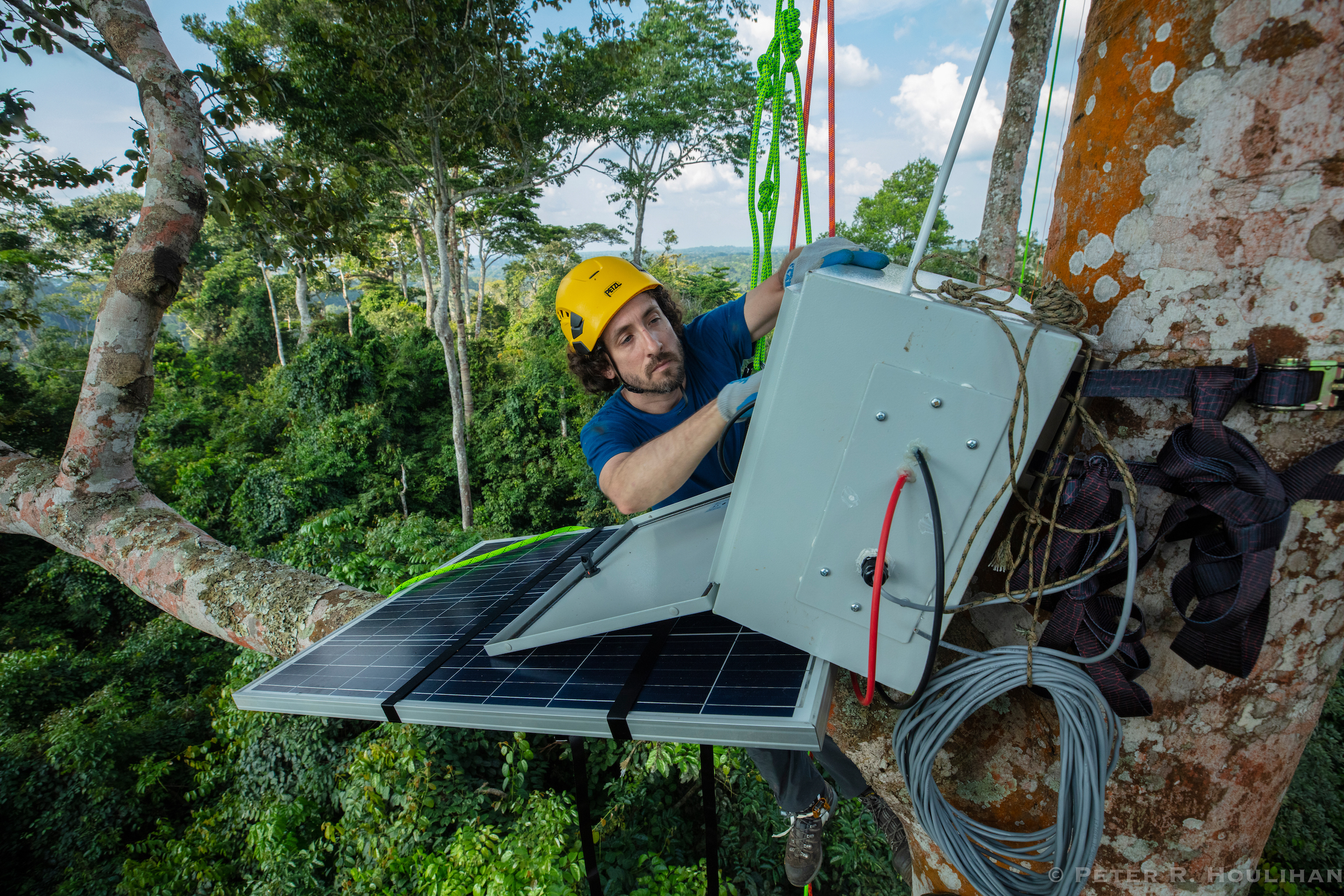 Working with the Congo Basin Institute and Peter Houlihan, the FieldKit team is deploying a series of stations in the Dja Faunal Reserve, one of the largest and best-protected rainforests in Africa. The stations, along with a tree-mounted LoRa radio system, will allow researchers to better study the reserve’s unique ecosystem, and will provide much needed infrastructures for Cameroonian scientists and for local communities.

If you’re looking for peace and quiet, don’t go to the Congo. Even at night, there is the constant drone of cicadas, the trill of frogs, the chirp of crickets. The escalating screams of the hyrax, the strange bird-like calls of moustache monkeys, the weird electronic beeps of fruit bats. The low hoots of owls, the looping whistle of pigeons, the woop woop woop of a coucal, the kok kok kok kok kok of the Great Blue Turaco. I spent the first nights in my tent awake, listening, parsing, cataloguing

If I’d been able to somehow tune my hearing, to expand its range, the raucous audio landscape of the forest would have filled up even more. Down in the subaudible range I’d hear the rumbles of the forest elephants, low pitched conversations between giants, stretching over tens of miles. Up in the ultrasonic would be the social chatter of cane rats, the quiet courtship songs of moths and, and the radar ping of hunting bats. Somewhere around forty-five thousand times the upward frequency limit of human ears, three thousand times higher than the highest known range of animal hearing (the greater wax moth), I’d find a quite new addition to the jungle soundscape: the chirp chirp chirp of data.

These signals are coming from FieldKit weather stations, installed on two of the Dja Faunal Reserve’s peculiar inselbergs– rocky islands that rise above the dense rainforest. The stations are measuring data about the inselbergs’ unique microclimates, and are sending the information to radio gateways we installed high up in the branches of nearby trees. By later this year, there will be four LoRa gateways in the reserve, which will allow local researchers to easily instrument the forest, tracking its wildlife and learning more about the ecosystem in general.

Radio has deep roots in conservation technology. In 1894, Alexander Stepanovich Popov demonstrated a device that could detect lightning from more than thirty kilometres away by picking up the radio waves generated by the strike. Recorded on paper rolls, the data points about lightning activity could be used to help the forest service investigate potential fires. As early as the 1950s, scientists began attaching radio transmitters to animals, with the intent of tracking their movement. These radio ‘tags’ emit brief pulses, which are then picked up by Radio Direction Finding (RDF) receivers, which triangulate the location of the signal.

One of the main challenges in using these technologies for conservation has been a fundamental limit of radio: the relationship between range and power. One of the inherent properties of radio signals is that signal strength is proportional to the inverse square of distance. Moving a receiver twice the distance from a transmitter reduces the signal strength by 1/4th. Moving it ten times farther from the transmitter reduces the signal strength by 1/100th. Put more simply, broadcasting a signal across a wide geographic range requires a lot of power. This relationship will be familiar to anyone who has tried to tune into a community radio station: unlike big corporate stations with high-powered broadcasters, smaller stations typically use less expensive, lower power set-ups, which means their signals are broadcast across smaller areas. When I was growing up outside of Vancouver, I could pick up the college radio station (CITR)… only if I parked my car at the edge of a north-facing bluff.

The radio gateways that we hoisted up into trees in the Dja, and the FieldKit Weather stations on the inselbergs take advantage of a clever innovation in radio that allows for something that seems to go against the rules I just told you: they can transmit over long distances with very little power. LoRa (Long Range) radio manages this trick by compressing information into short frequency modulated sinusoidal chirps (yes, that’s actually the technical term) that can be reliably picked up by receivers up about 10km away. Both the FieldKit weather stations and the LoRa gateways we deployed in the Dja are solar-powered; thanks to to small amount of energy needed to send messages they can keep up their data chatter happily without needing extra power.

LoRa works best when there is a clean line of sight between the transmitter and the receiver, so knew we wanted to get our gateways as high up in the air as possible. In an urban area this would mean putting hardware on top of tall buildings; in the jungle it meant getting up into the trees. The Congo rainforest is home to some very tall trees, some exceeding sixty meters (about two hundred feet). We had an extra advantage in the Dja because of the inselbergs, which rise above the forest as high as thirty extra meters.

Getting a radio gateway with batteries and a solar panel up into a tree is a delicate task, one that requires careful engineering, a careful eye on safety, and more than a little sweat. Luckily for us, we’re partnering on the Dja project with Peter Houlihan, a conservation scientist and lepidopterist whose area of specialty– the rainforest canopy– sees him spending a good chunk of his life off the ground. With Peter’s help, we were able to get gateways up into a tree on the Mussfelli inselberg and one at the central research camp; on our return trip in April we’ll install two more on the Bouamir and TK inselbergs. Over the coming years we hope to expand LoRa radio coverage to include the entire Dja reserve.

The Congo Basin Institute’s clearest and most urgent goal is to create research infrastructure in Southern Cameroon. In the short term, these technologies will work to attract outside researchers working on conservation, biodiversity, health, and other environmental projects. In the long term, it will support Cameroonian scientists to train with cutting edge technologies, and to plan and lead their own projects in the reserve. Another fundamental objective is to engage the local indigenous community – the Baka People – with the work being done in the reserve. Local knowledge is critical to the success of the Dja project, and during our next visit to the reserve, we’ll be training Baka guides to use the FieldKit stations, and exploring meaningful ways to give people ownership over the project’s long-term future.