For all of human history, we have lived with floods and worked to predict where and how they might occur. Flooding has always had an impact on local communities, and as climate change affects the entire planet, the increase in rainfall and sea level rise have led to an increase in flooding as well. The effects are immense; yearly, in the United States alone, flooding causes nearly 100 deaths and $7.5 billion in damages each year. In order to decrease flood risk, flood monitoring projects allow us to gather crucial data that can then be put toward planning, emergency response, and advocacy. FieldKit recently completed work for a project that helps the people of New York City visualize and interact with real-time flood data in a user-friendly interface.

FloodNet is a cooperative of communities, researchers, and New York City government agencies working to better understand the frequency, severity, and impacts of flooding in New York City. The data and knowledge gained through the FloodNet project can be used by local residents, researchers, city agencies, and others to advocate around and work to reduce flood risk.

FieldKit has been working with FloodNet to create the data visualization web interface for the FloodNet project, built directly on top of the FieldKit Portal. Through this partnership, we were able to develop a number of new features for the Portal, including the ability to incorporate non-FieldKit hardware into the platform, as well as refining the data analysis and collaboration tools within. We also had the opportunity to meet with and learn from people within the New York flood watching community, whose invaluable feedback and assistance has shaped not only the FloodNet site but also the FieldKit Portal. This project was publicly launched on September 1st, 2022, the one year anniversary of Hurricane Ida.

We were excited to work with the FloodNet team because their goal—making environmental data comprehensible and exciting for a wider community of people—aligned perfectly with ours. In order to bring the data to life, we surfaced data readings on the map view as bold, color-coded dots that show the latest data for a station, allowing you to see where flooding is occurring as well as its severity at a glance. We improved search within the map interface and also created a non-map-based, sortable, and interactive list view of stations and the current data coming from them within a project. Finally, each station now has an individual station page that shows station location and its unique attributes. 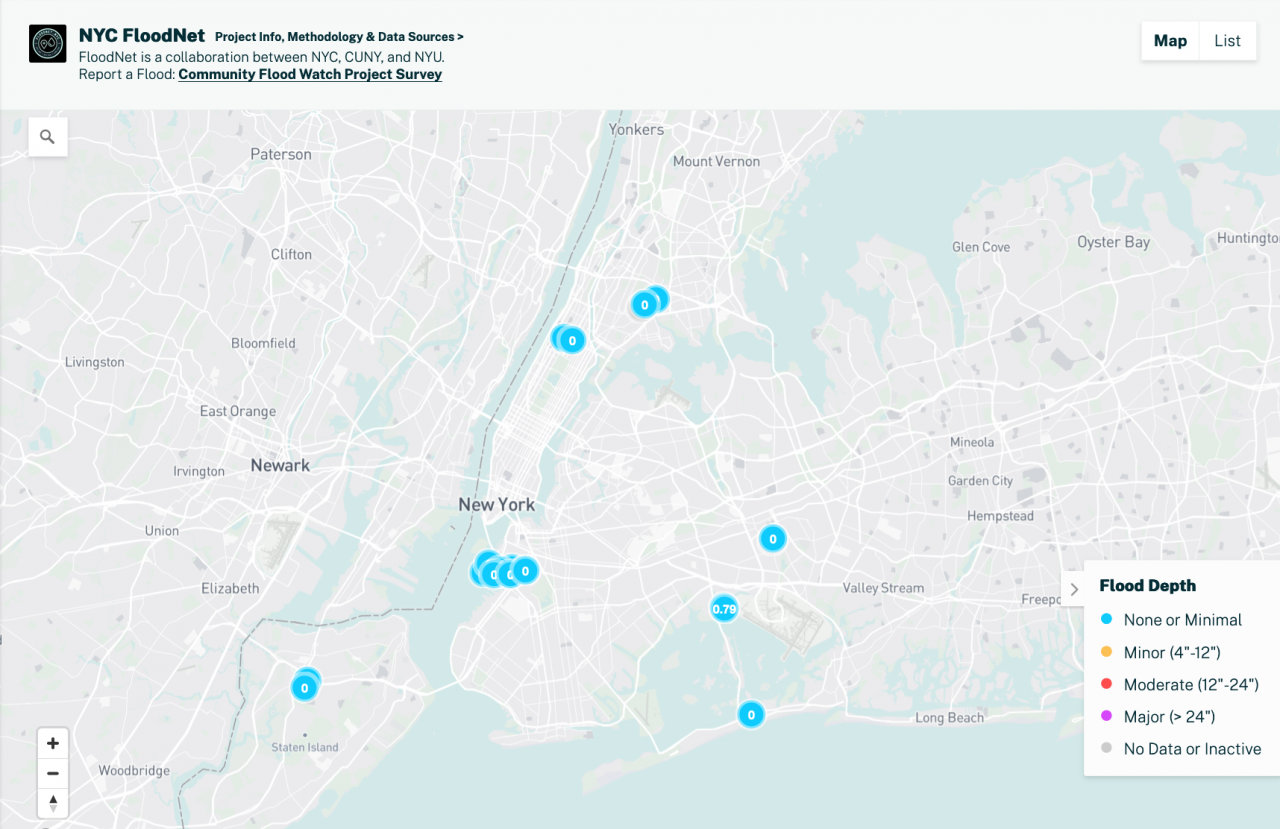 Our work with the FloodNet project also offered the opportunity to refine our data view page within the Portal, making it capable of facilitating complex data views and highlighting key data insights. We’ve added clearer grid lines, axis labeling, and chart color coding to make the data more comprehensible, refined the timeline scrubber and station dropdown list to be more intuitive, and more. Additionally, we added the ability to superimpose two charts on one another, so now users can compare flood data with precipitation or tidal data from nearby sensors on the same x-y axis. Within this interface, users can comment on the data to provide hypotheses, ask questions, or offer local on-the-ground knowledge. Finally, we implemented the ability to share data snapshots via a range of methods: Twitter, Facebook, email, or sharing a URL. Not only does this mean that users are able to get the word out there on their data insights, but we are meeting people where they are on social media platforms and giving them an opportunity to discuss the significance of key data insights affecting their own communities. 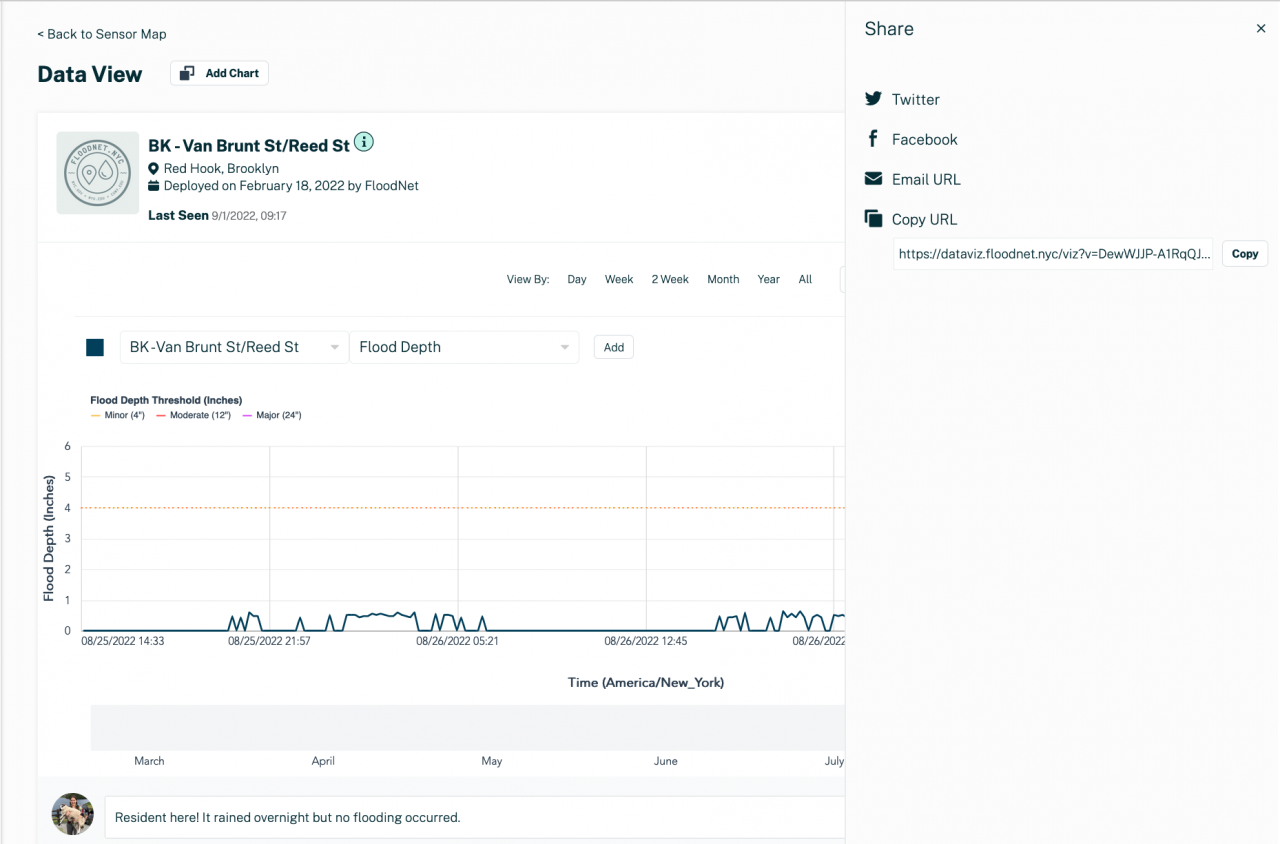 The FloodNet project uses their own hand-built sensors to gather data on street flooding and assess its impacts in neighborhoods that are vulnerable to high tides, storm surge, and stormwater runoff. As part of this project , we took the FieldKit Portal from a nascent set of FieldKit-specific features to a more widely relevant and sophisticated data exploration experience, capable of integrating with non-FieldKit sensors. Additionally, we brought in NOAA datasets for tide level and precipitation, adding invaluable context to the data provided by the sensors themselves. We are developing future plans around the ways in which we might evolve the work to date, as the ability to use our data interface with non-FieldKit sensors and datasets supports our greater mission to make open environmental sensing accessible to everyone. 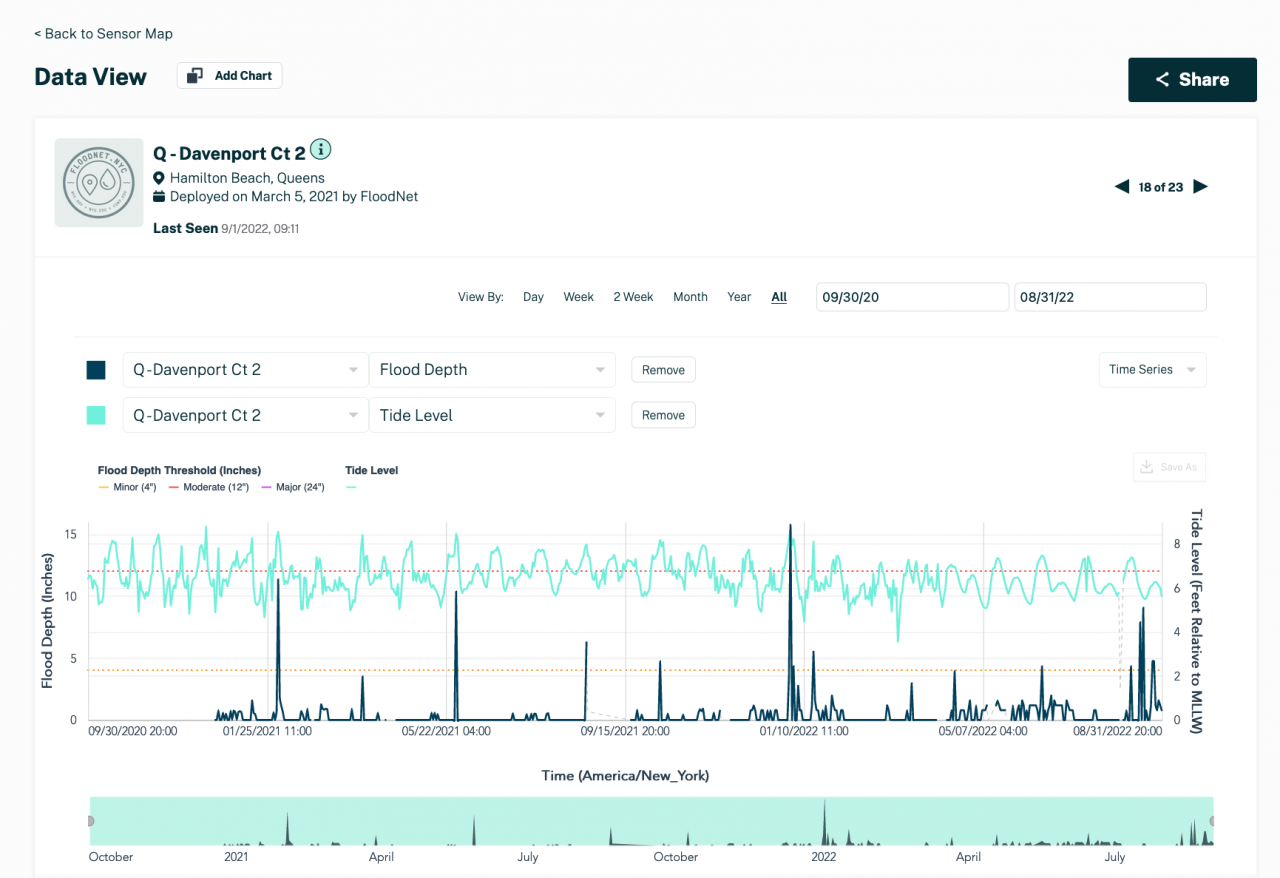 Are you interested in doing something similar in your community?

As we see the impact of climate change on more and more communities, the value of data-driven but accessible flood monitoring becomes increasingly apparent. We can see changes in the timing and intensity of rainfall, as well as sea level rise, directly affecting both the quantity and quality of water for many communities worldwide. Flooding affects people and infrastructure in these areas, damaging local economies and displacing people. It damages ecosystems across the globe through the degradation of aquatic habitats, affecting marine life and the people who depend on it to survive. In serious flooding events, emergency services can be overwhelmed, even leading to a loss of life. Real-time flood monitoring projects like FloodNet collect crucial data that can be used to improve resiliency planning, emergency response, and advocacy. Communities empowered with this information can then work together to protect both people and infrastructure from future flood hazards.

At FieldKit, we are keen to help provide this kind of a community-led system to people around the world. Through the achievements we’d made with the FloodNet project and beyond, we are now able to confidently support organizations with:

If you are interested in discussing a flood monitoring project for your community, please reach out to us and start the conversation.

Watch our walkthrough of the FloodNet platform below or check it out for yourself at FloodNet.